Oops, I seem to have gotten under Cllr Hotson's skin with my letter to the KM. He claims that the KIG site was not included in the 'areas of search' within the core strategy. This is very puzzling - the facts are open to all and, while KIG iteself was not mentioned, the site is shown as being a key area of search, i.e. destined for houses. How he can make these claims is beyond me.

If you look at the map (Key Diagram 5.1 on page 27 of the Core Strategy, also shown as Appendix 9) here, it clearly shows housing being built on the area now being proposed to be used by KIG. This is an excerpt from the preferred option showing the same area as the KIG proposal (the black area is "Area of search for development sites on edge of urban area"; pink area is "Major growth focussed within east/south east part of areas of search"):

Note where the railways cross and Junction 8 of the M20. The next map is from StopKIG showing the same area being covered by the Kent International Gateway. 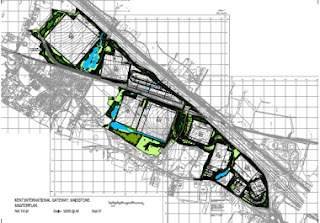 I think these diagrams clearly show that the preferred option in the Core Strategy had the KIG area being built on with houses. This plan was produced under the Tory administration of Maidstone Borough Council in Jan 2007. The Tories are now saying that they would never let this land be built upon - I can only conclude they now oppose their own plans.

As for his other point that nobody cares about the Green Party in Maidstone... almost 20% of the vote in Fant Ward this year and 40% in Headcorn last year says differently! Green politics is the politics of the future and it is here to stay.

Stuart
Posted by Stuart Jeffery at 18:59